4 Lessons Small Businesses Can Learn from the NFL Everyone has a favorite NFL team. Well, everybody who loves pro football certainly does. As the 97th season of one of the most loved leagues in the world kicked off this year, fans of the sport are getting ready for exciting times ahead (Go Broncos!).

Football is the game but the National Football League is the business. That it is the richest and most well managed sporting leagues in the world speaks volumes about its way of doing business. So what is the NFL doing right? A lot of things, apparently, and as a small business trying to stay in the hunt, you can learn quite a bit from the League.

Just because you are a fledgling business doesn’t mean that you can’t take on the big companies out there. You have to look for an opportunity, a weakness, and the proverbial chink in the armor and use that to your advantage.

Take the Houston Texans, for example. When they entered the NFL in the 2002 season, they were competing with the likes of the Dallas Cowboys. Texas, being a big state, always had room for another NFL team (it already had 2 MLB and 3 NBA teams) and so finding loyal fans wasn’t as difficult. Also the fact that a Texan team, the Oilers, shifted base to Tennessee (to become the Tennessee Titans) in 1997 made it the perfect opportunity for the entry of a new team.

Being a small business, you don’t have to worry about the competition so long as you are confident about your product and service USPs. If you can bring something unique and fresh to your business, people will like you and eventually start loving you. Look at Zappos, with their rock star customer service. This is what people love about them and shop with them, even though they sell the same products that hundreds of other e-commerce stores sell.

2. Make sure your customers are your diehard fans.

Every Seattle Seahawks fan is known as the “12th Man.” The “12s” are some of the world’s most enthusiastic and vociferous fans in the worlds. So much so that they even caused a mini earthquake (known as the “Beast Quake”) on the night of January 8, 2011, when Century Link Field erupted with excitement as Marshawn Lynch ran for a 67-yard, 4th quarter touchdown to put Seahawks up 41-30 over the Saints.

Many Seahawks wins have been attributed to the support of the “12s” by the founder and coach of the team. The legend of the “12th Man” is unique and ties the fan inextricably with the team.

As a small business, you need to get your customers to be part of the team. Hear their voices, respond to them, give them sneak peeks into what’s going on behind the curtains, get their feedback and show your love and gratitude to them by offering freebies, specials and discounts. It is also a great way to get user-generated content in terms of pictures of your customers flaunting your products, testimonials and posts on social media.

The NFL makes regular changes to the game to keep it fresh and exciting. No team has won back-to-back Super Bowls in more than a decade. This means that every year, any team has the chance to win if it performs consistently. Touchdown points have been increased from 4 to 6, NFL and AFL merged, the Super Bowl was launched, Wild Card teams were introduced (six teams have won the Super Bowl from the wild card position) and overtime rules were modified.

This constant tweaking and refining of the game is also a lesson small businesses need to learn and adapt to their business practices. Customer expectations are increasing every day and if you are not able to meet their demands and needs, they will move to your competitor. To stay in the game, you have to be innovative and ahead of the curve.

Did you know that the NFL runs a Business Engagement and Entrepreneurial Program for its players? The playing life of an NFL player is short and this intensive program seeks to improve players’ ability to evaluate business opportunities by covering topics like financial literacy, recruiting, hiring and business plan development. Since 2005, 175 (out of 700, who attended the program) players launched a business after retiring.

The lesson to be learned is to find resources that offer valuable information and knowledge on the finer aspects of doing business. Apart from passion and exuberance, a lot goes into making a successful entrepreneur. SCORE, for example, offers free mentoring services to small businesses. There are many free resources online that you can use to gain information that will be valuable for you to run your business.

The legend, Vince Lombardi, once said, “Football is like life – it requires perseverance, self-denial, hard work, sacrifice, dedication and respect for authority.” Aren’t these traits required to succeed in business as well? Although you’ve stared small, you can achieve big. So the next time you watch a match and cheer a touchdown by your favorite player, remember what the NFL can teach your business. 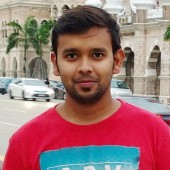 Avinash Nair is a digital marketer at E2M, India's premium digital marketing agency. He specializes in SEO and Content Marketing services. You can find him on Twitter: @AviNair52.