8 Ink-Efficient Fonts for Your Small Business Households and businesses can end up spending a small fortune on ink cartridges alone. There are many technological advances that can help you save money, but wouldn’t it be nice if you could save some yourself?

It turns out that homes and businesses can do just that – and it starts by choosing the right font. Here are 8 ink-efficient fonts that will stop your wallet from bleeding dry like a busted ink cartridge – plus some tips on how to best use each font.

First on our list of ink- and money-saving fonts is Garamond, a typeface based on the works of the French publisher and type designer Claude Garamond. Readability is one of the strongest suits of this simple yet elegant typeface, making it a popular choice for a wide range of applications and documents.

As a matter of fact, Apple used ITC Garamond as their corporate font from 1983 to 2001- but the font enjoyed even greater popularity in 2014when Suvir Mirchandani, a 14-year old teen science fair winner, proposed using Garamond in government documents instead of Times New Roman to save up money on ink.

This geometric sans serif typeface, released in 1991 by Monotype Imaging, was strongly influenced by the font Futura. Century Gothic’s thin print line keeps it ‘light’ while its higher lower case letters enhances its readability even with a small print size.

The computer department of the University of Wisconsin, Green Bay found that Century Gothic uses 30% less ink than the default font Arial and other common sans-serif typefaces, and the university was reported to switch to Century Gothic since the discovery.

Even PrintWise, a government-wide awareness campaign in the US to help employees cut printing costs, recommends Century Gothic along with Garamond for printed documents to save on ink.

But there’s a catch: printing with Century Gothic may increase paper consumption (offsetting the savings on ink) since it uses wider letters. So if you’re going to make the switch, you may have to adjust your margins to compensate for the typeface’s wider characters.

Ecofont is a family of TrueType fonts developed by SPRANQ in the Netherlands. Every character in the typeface contains tiny holes, resulting to 20% reduction in ink consumption when compared to Vera Sans on which Ecofont was based.

The typeface garnered awards during the previous years for its ink and money-saving benefits: the European Environmental Design Award 2010, Accenture Innovation Award 2011, Sprout Challenger Award in 2012, and the SMEs Innovation Top 100 in 2013.

The company behind the award-winning typeface even developed the Ecofont software that lets you print your documents with dotted characters even without typesetting your documents in Ecofont.

But while all of these sound nice, keep in mind that there are important considerationsbefore you switch to Ecofont for printing: For starters, while the dots are not visible at 9- or 10-point size, they’re visible at 12-point size upwards so the font may not look great on documents that require large characters.

In addition to that, the developers themselves noted that the ink savings you get may vary depending on the software you use and your screen quality, noting that it works best for OpenOffice, AppleWorks, and MS Office 2007.

Ryman Eco is a sustainable font developed by Monotype’s Type Director Dan Rhatigan along with Grey London and trusted UK stationer Ryman in an effort to find the perfect balance between slashing ink costs, maintaining high readability, and visual appeal.

If Ecofont uses dots, Ryman Eco uses white spaces between dozens of lines to make up each letter, reducing the inked surface area on a document. This translates to 33% less ink usage compared to standard fonts like Georgia and Verdana – and uses 27% less ink than other sustainable fonts.

Ryman Eco is also versatile. The characters look normal at point sizes 10 to 14 thanks to the bleeding of ink and toner, making it effective for everyday use. The tiny lines, white spaces, and curves become visible at larger sizes, but the text remains readable and aesthetically pleasing.

And here’s the best bit: There are no initial costs to recoup and you can start saving on ink right away as the Ryman Eco font is free to download.

According to the creators, if everyone used Ryman Eco for printing, the whole world would save 490 million ink cartridges and 15 million barrels of oil while reducing yearly CO2 emissions by up to 6.5 million tons.

Times New Roman remained the default font for MS Word until 2007, and the font found its way into newspapers and countless printed and online documents. Serif fonts, like Times New Roman, are recommended for easier reading as the tails on the tip and base of every letter form an invisible line that makes long blocks of text flow together.

Next time a thesis or business document with long lines of text needs to be printed, stick to the tried and tested Times New Roman for better readability – doing so will save you a lot of ink too according to Katie Waller of Which.co.uk.

The documentary filmmaker Errol Morris ran a covert experiment on 45,000 online readers of The New York Times –showing a passage from David Deutsch’s “The Beginning Of Infinity.”

The readers were shown the passage written in any of the following fonts –Baskerville, Computer Modern, Comic Sans, Georgia, Helvetica, and Trebuchet, and were asked if they think the statement was true.

The conclusion of the experiment: Baskerville confers a 1.5% advantage towards agreement. Next time you have to print something that could use a bit of persuasive, convincing power like a business proposal or an opinion article, give Baskerville a try.

Additionally, Inkfarm.com, a well-reviewed (BBB A+ rating) online printer ink shop based in Seattle, analyzed 134 fonts to find the best font for ink economy – and Baskerville Old Face was one of their top recommendations for long lines of text.

Furthermore, the company’s online ink usage calculator shows that printing Baskerville instead of Arial can slash ink usage by more than 37%.

The idea of saving ink and money by choosing the right fonts may sound new to you. But active bloggers and designers Matt Robinson and Tom Wrigglesworth have known for a long time that not all fonts are created equal.

Their work “Measuring Type” sought to evaluate the ink-efficiency of the most popular fonts by using ballpoint pens to see how much ink a font uses.

The end of their project saw the mono-spaced slab serif font courier almost top the list (second only to Garamond). This typeface was made to resemble the output from a strike-on typewriter and soon became the standard font in the typewriter industry.

Courier looks plain but it has its uses. It conveys a bureaucratic look and mimics the font of a typewriter, and is a good choice for plain text documents and scripts.

Moreover, all of its characters have the same width, hence the term mono-spaced, and works well for perfectly aligned blocks of text.

Robert Smith designed this casual connecting script typeface in 1942. Brush Script dons cheerful strokes that resemble letters handwritten with an ink brush while the lower case letters are purposefully made to look irregular.

The problem with brush script is that it’s outdated and has been used in print for more than half a century. Nevertheless, it’s a good font to use as far as ink economy is concerned. Designers found, rather surprisingly, that it uses less ink than Times New Roman even with all of its add-ons, thick strokes, and tails.

Brush script isn’t a sophisticated typeface, but it’s an acceptable, eco-friendly font for headlines and logos than other bold fonts.

These 8 ink-friendly fonts are readily available to help cut printing costs. But of course, printing sustainably and slashing costs shouldn’t stop with ink-efficient typefaces – especially if you’re running a business.

Hiring a managed print service provider, choosing energy- and ink-efficient printers, printing only what needs printing – these are just some of the steps you can take to save even more so don’t hesitate to explore these options. 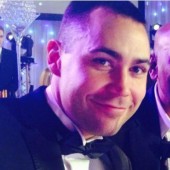 Richard Kao is the Director of Sales and Shareholder for COS Group. Richard has been in the industry for over ten years and specialises in creating bespoke document management solutions. Richard hold a BA (Hons) in Business management and a MSc in Business Systems.