I’m sure that you, like me, get asked all the time: how did you start your business? What led you down this often-rocky path to entrepreneurship? Knowing your story and being able to tell it is actually great branding for your business.

Just over 10 years ago, I worked for an investor relations firm as Communication Director. I loved the work, but my boss was a tad insane (he confessed to being a coke head in the 1980s, so that should tell you something about his volatility).

One day, he got the idea that every one of his employees should sign a noncompete agreement. Now, in general, this isn’t an unusual idea, but his agreement was so airtight, that none of us would be able to do what we were trained to do in any field for five years. That kind of puts a damper on one’s career.

A coworker of mine decided not to sign the agreement. He knew our boss would likely fire him, but he took the risk. And yep, he got fired.

I dragged my feet as long as I could, but I knew I couldn’t sign it either. And I knew the risk. So when the day came when my boss asked me to turn in my signed agreement, I told him he couldn’t, and I told him why I disagreed with his agreement overall. He was flummoxed; I don’t think he expected insubordination from me. He told me to think about it some more.

I took my lunch break in tears, and called my then husband.

“Come home,” he said. That was all I needed to hear. I dried my tears, walked in that office, and told him I would not sign it. I then gathered up my belongings, said goodbye to my coworkers, and left, never to look back.

After spending a few days in shock, I realized I needed to make money. Fast. At the time (2006) MySpace was still popular, and they had a Classifieds section. Browsing that, I found a man who needed a press release written. I could do that!

He was my first client (and we worked together for about a year). I realized that many small businesses needed marketing help, but couldn’t necessarily afford to hire a full-time employee. I would fill that niche.

I set myself up with a business name, a bank account, a logo, and a website. Suddenly I was a business owner!

To this day, I am grateful for that irrational boss and crazy noncompete agreement. Without them, I wouldn’t have tested my limits and found my true calling as an entrepreneur.

Maybe you’ve never given it thought. Maybe you always planned to be a business owner. Maybe, like me, you stumbled into it accidentally. Whatever the start, here you are, a few months or years or decades later. But it’s that initial story that led you to where you are, so celebrate it! 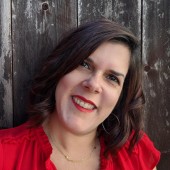 Susan Guillory is the President of Egg Marketing & Communications, a marketing firm specializing in content writing and social media management. She's written three business books, including How to Get More Customers With Press Releases, and frequently blogs about small business and marketing on sites.